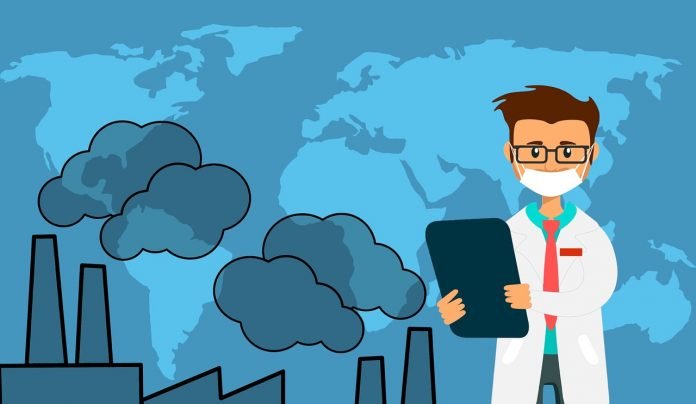 Poor air quality and SMOG is a dangerous environmental problem, especially for large metropolitan cities. It is an unhealthy and irritating mixture of air pollutants. The primary constituent of smog is ground-level ozone, it is formed by a chemical reaction of carbon monoxide, nitrogen oxides, VOCs (Volatile organic compounds), and heat from sunlight.

In this article, we will define briefly smog, its causes, and its hazardous effect on human health.  We will also try to describe the ways to reduce it and will also explain the ways to protect from smog.

What Everyone Should Know About COVID-19

SMOG is a type of air pollutant and the word “SMOG” is basically derived from the merging of two words; smoke and fog. It is a mixture of smoke, gases, and chemicals that makes the atmosphere difficult to breathe.  Smog is a fog or haze intensified by smoke or other pollutants. It is a blackish, greyish, or yellowish fog formed by a mixture of pollutants in the atmosphere which consists of particles and ground-level ozone. Nitrogen oxide and volatile organic compounds combine with sunlight to form ozone. On the other hand, respiratory distress and burning eyes associated with smog are caused by the entrapment of ground-level ozone by heat inversions and other weather conditions.

Two definitive/ distinctive types of smog are recognized as:

Sulfurous smog is also called “London smog”. It also termed “Classical smog”. It results from a high concentration of sulfur oxides in the air and it is caused by the use of sulfur-bearing fossil fuels particularly coal. Classical smog results from a large amount of coal burning in an area and is caused by a mixture of smoke and carbon dioxide. Sulfur dioxide is a serious air pollutant. In cities like Los Angeles, it is the exhaust fumes of the cars which cause the smog. Sulfurous smog also terms as reducing smog because it has sulfur dioxide which is a reducing agent. Reducing smog refers to air pollution episodes characterized by a high concentration of sulfur dioxide and smoke.

This type of smog is a brown haze above cities and it is most obvious/prominent during the morning and afternoon especially in densely populated cities. Photochemical smog is formed when sunlight interacts with certain chemicals like nitrogen oxides and volatile organic compounds in the atmosphere.

Ground-level ozone not emitted directly into the atmosphere.  It is formed from the photochemical reactions between the oxides of nitrogen (NO) and volatile organic compounds (VOCs produced from paint and evaporation of fuel and solvents) in the presence of sunlight. It is also sometimes known as   “Oxidizing smog” because it has a high concentration of oxidizing agents. Ozone is a common oxidizing agent found in photochemical smog.

The brownish color of the smog is due to the presence of nitrogen dioxide which is orange-brown. The entire chain of this chemical reaction is initiated by the absorption of solar radiation. In cities like Los ANGELES, it is the exhaust fumes of the cars which form the smog.

In present times SMOG is caused mainly due to

Smog has overall harm to humankind  ( especially old age & kids) and plants health as well. It has devastating effects on the environment. It also has a negative impact on overall society because a lot of the population affected, the number of admissions to hospitals increased in smog-affected areas. Work quality is also affected in general.

It has a dangerous effect on the lungs and heart health. It can cause irreversible and permanent damage to both of these systems. Smog can cause or aggravate health problems such as asthma, emphysema, chronic bronchitis, eye irritation, headache, difficulty in breathing, and reduced resistance to cold & lung infections. It can worsen heart problems. Breathing in smog is feeling like breathing in a suffocated, smoke-filled room. It can cause burning and watering of the eyes.

Smog can make it feel difficult to breathe deeply especially during exercise, according to the Mayo clinic. Smog is in general toxic to human health and can cause a shortened life span and premature death. It increases the risk of deaths from heart problems and lung cancer. It increased the risk of strokes and heart attacks.

The ground-level ozone in smog is also having a harmful impact on plants, it inhibits plant growth and can cause widespread damage to crops and forests. Photochemical smog has devastating effects on the environment. Some plants such as tomato, spinach, etc are highly responsive to ozone, so photochemical smog can decimate these sensitive crops, trees, and other vegetation. Ozone causes necrotic pattern on the upper surfaces of the leaves of trees. Pollution can interfere with a plant’s ability to undergo photosynthesis by physically damaging leaves where it occurs.  Ozone also causes a condition called chlorosis, in which plants’ leaves turns yellow from insufficient chlorophyll levels.

Smog or poor air quality is one of the biggest problems of industrialization and large metropolitan cities.  People living in many areas of the world especially large cities are regularly exposed to air pollution levels far beyond the limit recommended by the world health organization(WHO). We should know the ways how to cope with these situations and try to fulfill our part by telling others about the situation and also try our best to reduce or eliminate this problem.

Always know your smog index/level. In order to protect yourself and your family, you need to inform about the ozone level in your area.  Most communities have a system for air pollution alerts. Always get in touch with your local or state air pollution control agency, a local hospital, or your doctor. Local television and radio stations also report on air pollution and weather alert. Certain websites also provide rapid and up-to-date information regarding air pollution indexes like Environmental Protection Agency (EPA). EPA has developed an index called the Air Quality Index (AQI) that reports on the level of ozone and other pollutants nationally. The index has colors designed to ozone levels to make it easy to understand the air quality in your community.

The AQI ranks air quality from zero to 300. Levels from 0 to 100 are considered good and moderate.  Levels 100 to 150 are unhealthy for the sensitive groups. Level above 150 is considered unhealthy for everyone.  Level above 300 is hazardous. They are marked red, purple, and brown respectively on the color index.

Always wear a facemask while going outdoor in smog or when an air quality alert has been issued. When you should wear your mask depends on your age and health and there is no strict guideline that everyone everywhere agrees on.  A proper air-filtering face mask can be your best friend when air quality is low. The air is getting more dangerous to breathe all over the world. As pollution gets worse air-filtering masks get fashionable. Wearing a pollution mask to protect yourself from exposure to dangerous air pollutants that lead to lung and heart disease is advisable.

Face masks are of different types but N95 (meaning the mask can remove 95 percent of all particles in the air that are at least 0.3 microns in diameter or larger) or FFP3 (meaning the mask may only leak a maximum of 5 percent or air and it must filter 99 percent of all particles measuring up to 0.6 microns), both standards that indicate a high ability to filter out fine dust.  A detailed note on face masks will be shortly added to the website. But remember Air pollution is a universal burden that affects us all and somehow we are the ones obligated to find ways to reduce our exposure with these insufficient tools. A far better solution is to prevent the solution at its source.

Use of Air Purifier Good or Bad?

Air purifiers are considered the most effective source of removing polluted air and also improving air quality indoors. Indoor air purification has gained widespread popularity with the surge in air pollution problems in urban areas. Indoor air purifiers are advertised as safe household products for health-conscious people but some purifiers produce ozone during operation.  But Indoor Air Purifiers that produce small amounts of ozone may be risky for health.   One should know that Air Purifiers that use only high-efficiency particulate air filters (HEPA filters) are recommended because there are no ozone emissions from these air purifiers. Ionizing air purifiers because of their electric charge, do create ozone.

Ozone generators sold as air purifiers intentionally produced the gas ozone, ozone can mask odors by changing the chemical composition of particles or other gases in the air, making the air seem fresher and cleaner.  However, ozone generators/ Air purifiers don’t actually filter out the small particle.  Inhaling ozone, even in small amounts, can irritate the lungs and injurious to health. Effects of ozone inhalation are throat irritation, coughing, shortness of breath, chest pain, and increased risk of lung infections/ respiratory tract infections.  Air Filters that remove small particles like HEPA (high-efficiency particulate air) filters are recommended they can work and remove allergens from the air without generating ozone. These filters must be replaced or cleaned regularly according to international standards and manufacturers’ guidelines.

Smog is becoming a serious problem in big urban metropolitan cities and has a serious negative effect on people, animals, and plant life.  The emissions from vehicles and industries as well as the combustion of wood and coal altogether contribute to this foggy Smog or polluted atmosphere. The gaseous emissions are the main elements that form smog when acted upon by the sun’s ultraviolet light together with particulate matter and volatile organic compounds. Heavily populated urban areas are affected more by the smog because of the combustion of different types of fuel and a huge number of vehicles both heavy and light-duty motor vehicles. Everyone in the community should participate in reducing the smog /polluted air. One should take steps to minimize one’s exposure to air pollution.

Steps to Live in Smoggy Days.

Be a Member of SMOG Awareness Campaign

TRY TO SPREAD SMOG AWARENESS TO YOUR NEAR AND DEAR ONES

TRY TO BE ECHO FRIENDLY

TRY TO BE A SPOKESMAN

TRY TO BE A WARRIOR AGAINST POLLUTION

REMEMBER EVERY ONE CAN CONTRIBUTE TO SPREAD THE AWARENESS

EACH DROP CAN COLLECT TO MAKE RAIN

TAKE CARE OF YOURSELF AND YOUR COMING GENERATION

This article is written in order to spread awareness regarding smog and its hazardous effects. All copyrights are reserved.  Questions and queries are welcomed at info@livefitpk.com