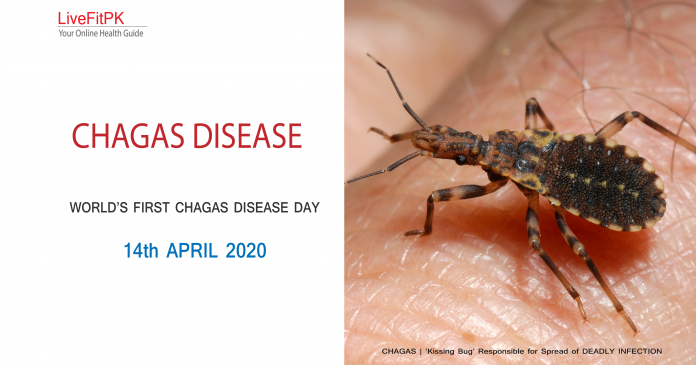 The theme for Chagas disease Day is

Chagas disease is a major public health challenge. A silent and silenced disease for decades because of disease slow progression and it affect to poor people who has no access to health care and has no political voice. It was on this date (14 April) back in 1909 the very first patient a Brazilian girl is diagnosed with Chagas disease by Dr. Carlos Ribeiro Justiniano Chagas.

Raising awareness  regarding this neglected tropical disease (NTD) which often diagnose in its later stage helps in improving the early detection and treatment of disease and also helps in controlling the spread of disease at an earlier stage.

Start Exercise Today – Why, When & Where

Chagas Diseases is also called American trypanosomiasis. It is an infectious disease caused by the parasite Trypanosoma cruzi which is found in the feces of Triatominae bugs. It is a potentially life-threatening illness that is transmitted through the faces or urine of a Triatomine bug. This bug is mainly found in Latin America. It is a forgotten disease that largely affects the rural and poor population. Millions of children and adults suffering worldwide from this disease and in the majority of cases they die.  6-7 million people worldwide are affected by Chagas disease.  10,000 people die each year and 75 million people are at risk of infection. During the past decades, the Chagas disease has been detected in most parts of America, Canada, and in many European and some western pacific countries.

These are some major causes of this disease so take care of yourself, eat well-cooked food. Before a blood transplant or any other organ check it at least once. Most important make a checkup of the woman’s child that was infected by the disease. By following these hacks you can be more secure.

The symptoms of the disease appear after a Triatominae bite. Chagas disease has an acute and chronic phase. If left untreated infection remains lifelong. Symptoms may range from mild to severe. Most of the people experienced the symptoms in chronic or later stages.

Following an acute phase, most infected persons entered through a prolonged asymptomatic phase of the disease called the chronic phase .mostly people remain in this phase and are unaware and asymptomatic for the rest of their lives. However, 20 to 30 % of patients suffering from Chagas disease developed 10 -20 years later severe and sometimes life-threatening medical problems over the course of their lives. The symptoms or complications of Chagas disease are as follows

Boost Your Immunity Against COVID-19

Your clinician will conduct a physical exam asking about your symptoms and factors that can put you at risk of Chagas disease. The diagnosis of the disease is made on the basis of the following tests

Chagas disease can be diagnosed by blood test

Or presence of  parasite specific antibodies in chronic phase

The mainstay of treatment of Chagas disease is as follows:

To kill the parasite two drugs (benznidazole and nifurtimox) are effective in curing the disease if given at an earlier stage of infection. The prognosis of the disease is good by these two medications if given soon after infection or at the onset of acute-phase including congenital infection. The efficacy of both drugs diminishes, however, the longer the person has been infected and the adverse reactions are more frequent at an older age.

There is no vaccine for Chagas disease till now. As we all know that “prevention is better than cure” so by adopting certain measures we can prevent this deadly disease.

If you suspect infection with COVID-19 and are undergoing treatment for Chagas disease, inform your health care professional to ensure you receive the best possible care. Source: World Health Organisation (WHO)

This article is written for general public health and awareness only. If you are suffering from any health problem, contact to your local health care provider.  All copy rights are reserved. Any comments or queries are welcomed at info@livefitpk.com.